Explore the surface, probe the depths of Torah with Rabbi Kremer

Enjoy the afternoon with us!  Game Day Tables available for people who play, Mah Jongg, Canasta,Bridge, other card or board games

Musical Shabbat Service on the Beach 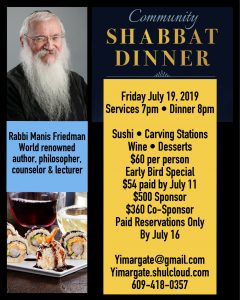 Services at 7pm and Dinner at 8pm

Chabad at the Shore welcomes Israel Nitzan,  Deputy Consul General of the Consulate General of Israel in New York, to speak to our community.

Enjoy good food, wonderful company and our inspiring speaker. Our catering team will prepare delicious homemade challah, gefilte fish, salads, chicken soup, dessert and much more. Be a part of our warm community and rsvp today.

About Israel Nitzan:
Prior to his current appointment, Israel was the Director of the Foreign Ministry’s United Nations Political Affairs Department. as well as, Minister-Counselor for Political Affairs at the Permanent Mission of Israel to the U.N.

Previously, Israel served in the Arms Control Department where he worked to combat the proliferation of weapons of mass destruction around the world. Israel is currently on his fourth foreign posting including two overseas positions at the Israeli Embassy in Cairo, Egypt.

Israel was born in Netanya in 1975. He completed his B.A. in Middle East History and International Relations from the Hebrew University of Jerusalem following his service in the Israel Defense Forces. In addition to Hebrew and English, Israel is fluent in Arabic and is married and a proud father of four.

“Seeing the world through Jewish eyes”

We're not around right now. But you can send us an email and we'll get back to you, asap.